NIER Wiki
Register
Don't have an account?
Sign In
Advertisement
in: Articles to be expanded, Characters, NieR: Automata Characters,
and 2 more
English

"Perhaps we are not so different after all."
—Adam

Adam is a major character and the secondary antagonist of Branches A and B in NieR:Automata. He is the older twin brother of Eve.

A silver-haired young man whose identity is shrouded in mystery. He has a cool-headed temperament but can take merciless action for the sake of his objective. As mentioned before, Adam appears to be a calm, mysterious and an intellectual man. He has a deep interest in humanity and anything that is related to them. He is a man of curiosity who aims for one goal, learning more about humanity. Though he would not hesitate to use cruelty in order to achieve his goals. Adam is shown to have a deep interest in the concept of death, that is because death is something that he considers an extremely complex concept of humanity, whereas it almost means nothing to machines as they can regenerate over and over while if humans die, it's the end for them. In the light novel adaptation, Adam is seen as a more complicated, melancholic and depressed character than he is shown in the video game. It is revealed in the light novel that he deeply despises whoever placed him and Eve in such a world with absolutely no proper education or care. He thought that if he had to describe this horrible thing that happened to them, he would call it "hatred". He mentions that Eve learns from him, however he has no one to learn from. No one is there to educate him like he does for Eve, Which made him despise whoever placed them in this world. This resulted in him educating himself by learning from humans. It frustrated him how complicated humans and learning about them were, especially the term death. Each time he learns something, there comes another complicated concept that he does not understand. Death is a perfect example of that. He wanted to understand why humans took death seriously, as it meant nothing to machines.

Aside from his usual self, Adam is seen to be a good brother and role model to Eve. He thinks that he is obliged to play the role of a brother to Eve. In route D, Adam held Eve with a gentle embrace as he was sleeping in the Ark. This also indicates that he has become more openly affectionate towards his brother since he is free of malice in the Ark. Additionally, the light novel reveals that Adam actually does not think that Eve is dumber than he is. He does not in a way think he is stupid. He simply uses the term "Prefers", as in Eve prefers other things than what Adam prefers. Adam strives to be more knowledgeable whereas Eve does not care about knowledge, in fact he enjoys physical activities. Adam simply worries that if Eve does not learn like he does, then they won't grow and adapt. Aside from all of this, it can be shown that Adam is actually a masochist. He enjoys feeling pain as it is part of a human feeling.

A naked Adam spewed out by the ball of robots.

A naked Adam fighting 2B and 9S.

A naked Adam stabbed by 2B and 9S. 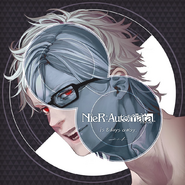