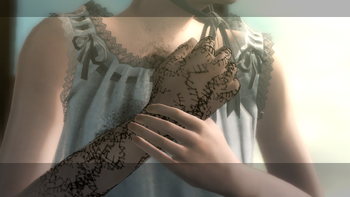 Black Scrawl is the ailment that affected Yonah, which caused strange black runes to appear on her skin. Nier was trying to find a cure for it, at any cost.

It is revealed that the Black Scrawl isn't actually a virus, but a malfunction of a Replicant's body caused by the relapsing or death of their correspondent Gestalt. When the Gestalt is fully relapsed or dies, the Replicant of that Gestalt cannot be recreated by the Replicant System again as it can't retrieve the Replicant's data from the gestalt.

Yonah's Replicant will always have the Black Scrawl due to her half-relapsed Gestalt being kept in stasis.