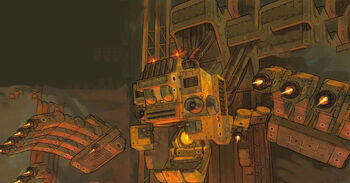 Defense System Geppetto is a boss Robot in NieR RepliCant and NieR Gestalt (NIER), encountered at the end of the first visit to the Junk Heap.

Nier explores the Junk Heap searching for the missing mother of the brothers Gideon and Jakob. After he defeats the malfunctioning Geppetto, he discovers the corpse of the mother lying besides that of a male accomplice. Concluding that the machine slew them, but still left with more questions than answers, he decides to again return to the brothers, undecided on if he should deliver the grim news.

The player must fight its hands before they can damage the head, the latter of which is immune to magic. The hands shoot laser beams from their fingers. They also have a move where a hand hovers above Nier before falling down and crushing him. The hands can be damaged by shooting magic at its palms.

After the hands are destroyed the head will begin attacking, and it only has two attacks that it uses one after the other. It will shoot pairs of homing rockets, with the length and ferociousness of the barrage increasing every time its health gets lower. Afterwards it will open its mouth to fire a giant continuous wave cannon laser beam. Throwing bombs into Geppetto's mouth during this attack is the only way to damage the head.