There are four endings in NieR RepliCant and NieR Gestalt (NIER), five in its remake, each progressively showing the true ending. To get a full view of the story, all endings must be seen. Endings A and B are attained by playing the game twice on one save, but endings C and D can only be obtained under certain prerequisites. 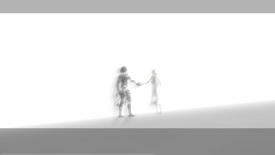 Replicant Nier is about to kill Gestalt Nier.

He gazes at the Shadowlord, now having lost all hope. Replicant Nier hesitates for a second before dealing a final blow.

Afterwards, Nier goes to Yonah's side. Worried when Yonah is not responding to his calls. Soon, Grimoire Weiss, after losing his body, uses the last of his strength to speak. He tells Nier that she will awaken when someone says the name of the one she loves the most.

The player is then given a choice to write their characters name.

Entered correctly, Yonah slowly opens her eyes and observes her brother/father after the five years.

Kainé goes to leave but is stopped by Nier, asking if she wanted to stay with them. She declines his offer, saying she has "[her] own shit to take care of."

The scene shifts over to a flashback of Nier and Yonah back at the village, sitting on the hill near their house. Yonah runs up to a sitting Nier and gives her brother/father a Lunar Tear as the both lay down on the hill.

The scene shifts again, showing an older Yonah and the Shadowlord about to take each other's hand, then the Yonah takes hold of and hugs the Shadowlord's arm; hinting that Gestalt Nier and Yonah have reunited. 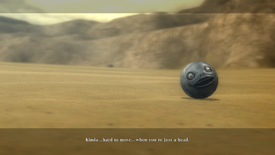 Ending B starts the same as Ending A. After Replicant Nier defeats Gestalt Nier. The scene then changes to Gestalt Nier scrunched up, weeping to himself—alone in a white void—as he regrets all the hardships he put Yonah through. A flashback occurs, with Yonah and himself alone in the grocery store. He tells her that he isn't hungry, while Yonah tries to force him to eat something. The scene reverts back and images of enemies, that Replicant Nier killed, gaze at him while he cries to himself. Gestalt Yonah, in her young form comes to greet him and thanks him for always being there with her, and shares the cookie with her brother/father.


After the credits, Emil, who survived the blast, crash lands in the desert. Now just a head, he goes out to search for Nier and Kainé, bouncing and rolling into the distance. 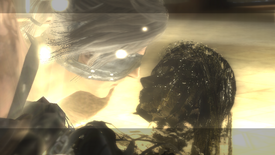 Ending C is a continuation of endings A and B. After Nier defeats and kills the Shadowlord, as Kainé goes to leave she begins to relapse. She then goes into her shade form, forcing Nier to fight her. After Kainé is incapacitated, Tyrann explains to Nier how he can save her. Either by killing her, or forgoing his entire existence for her. If the player chooses the first option, Nier stabs Kainé as he kisses her, finally ending her pain. Tyrann tells Nier Kainé's last words: "Thank you." A lunar tear falls next to a distraught Nier. He picks it up as he gazes through a window. He then goes home and lives with Yonah, with both living out their remaining days before they die from the Black Scrawl. 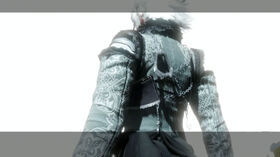 If the player chooses to sacrifice his entire existence for Kainé, the player's data is erased and everyone forgets he ever existed. Nier disappears, while Yonah thanks Kainé for saving her. A lunar tear falls on the ground, which Kainé picks up. When she holds it, she has a flashback of Nier and mentions that it feels like she found something special. 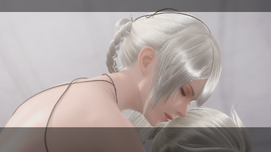 Ending E is a continuation of ending D, which can be activated after starting a new game and playing up until the second fight with Hook when Nier tries to wake up Kainé. In "Ending E" (told in both Grimoire Nier and NieR Replicant ver.1.22), three years after the Shadowlord disappeared, a program to reset the entire Replicant system begins its execution in the Forest of Myth, and Kainé goes to destroy it, alongside Emil, now with a reconstructed body including four arms. Eventually they go deeper into the tree where Sleeping Beauty resides, eventually finding themselves in a place reminiscent of The Tower, and Kainé has to defeat a recreated version of Hook with the help of Grimoire Weiss. Kainé recovers the person she cherishes, which allows the save file the player got ending D on to be restored. Afterwards, a giant flower reminiscent of a Lunar Tear blooms in the Forest of Myth, as the forgotten Nier is reunited with Kainé and Emil, the approximate age as when they first met (16 for Brother Nier, 39 for Father Nier), reconstructed with the “memories” that the tree had of his first visit to the Forest of Myth.