Grimoire Weiss is a companion and Tritagonist in NieR and its remake.

He was a hovering, magical tome that served as Nier's access to magical spells (known as Words), new melee attacks, and weapon upgrades.

Grimoire Weiss, also known as the "white book", was initially released with Nier's help. He was known as the white book, because he is meant to stop Grimoire Noir, the black book. In the past, Weiss was a part of Project Gestalt along with those who became known as Grimoire Noir and Grimoire Rubrum. Grimoire Weiss "only contains a small portion of the Sealed Verses' power," as said by Devola and Popola, meaning that the power of the Sealed Verses are immensely strong.

Grimoire Weiss appears as downloadable content in NieR:Automata. His likeness can be used as a Pod appearance.

And Then There Were None

See also: And Then There Were None

Grimoire Weiss was born as a human male, over a thousand years before the events of Nier.

At age 10, Weiss was taken into the Hamelin Organization and trained as a child soldier against Legion. At age 16, he defeated the Legion leader Red Eye as part of Hamelin's 13th Crusade squad. Only two of the unit's soldiers survived: Weiss and an unnamed girl.

At age 19, Weiss entered a top-secret Hamelin experiment to obtain a honorable discharge from the organization's forces, alongside the other survivor of the battle with Red Eye. In the experiment, thirteen Hamelin soldiers were made to kill each other to be absorbed into magical grimoires; Weiss was absorbed into a white book, while the girl was absorbed into a deep-crimson book and became Grimoire Rubrum.

Grimoire Weiss is a mysterious book of immeasurable wisdom and age that becomes a powerful ally in Nier's journey to cure Yonah. Grimoire Weiss possesses a sharp tongue and an inflated ego, but often feigns ignorance. Whether he does this to test Nier or because he simply loses interest is unknown. What is certain, however, is that he can't stand to have his name abbreviated. He must be addressed by his full name at all times! Aside from being a talking, floating, all-knowing book, Grimoire Weiss uses the Sealed Verses that Nier uncovers to cast powerful magic spells that assist Nier in combat.

Weiss is in fact a Gestalt of a Hamelin Organization Crusader (a group of child soldiers raised to use magic to fight against the Legion created by the White Chlorination Syndrome that spread from the Dragon) bound into a book. The Red Book, Grimoire Rubrum and the Black Book, Grimoire Noir, were also created this way. The true purpose of Grimoire Weiss is to fuse with Grimoire Noir to force the Shades to return into their Replicant bodies and become true humans again.

During the battle against the Shadowlord, Weiss falls on the ground, revealing that all his power was used by Nier in the last five years. He then uses the last of his strength to completely destroy Grimoire Noir, destroying his physical form in the process.

According to side materials, his consciousness remains within the world without a body. He hasn't completely disappeared from existence.

In the DLC, Nier and Grimoire Weiss happen upon a diary. Weiss asks Nier about it, with him responding that the later pages don't make sense. They then venture into "The White Room," and a series of familiar locations and new locations with waves of Shades to fight. At the end of each location, more of his mother's diary is revealed, explaining the war between Gestalts and their Replicants, and how the Dragon brought magic into the world where it didn't belong. When they finish reading the diary, both wonder what the meaning of the final pages were.

Grimoire Weiss can be purchased to unlock the Boy Nier/Sorcerer job class and 300 magic crystals during the NieR RepliCant x SINoALICE collaboration event. They cost $27.10 and are available for purchase until March 8, 2019 (JST). When used in battle, he lowers an enemy's physical attack and magic attack power. He can randomly target one or two foes.

The measurement of his width is the last answer for the Twitter collaboration quiz.

We fought for what seemed like ages.
To kill those things that took a twisted human form.
To protect those precious to me, with my own hands.

We were deceived for so long.
Deceived by people in a land we've never been, whose faces we've never seen
Issuing orders from a safe distance.

We must have been in love.
And despite the fact I couldn't save you,
but I never got to thank you for saving me.

These fragments glimmering deep in my depths...
they seem to be the vague memories of people...
the faded remnants of human wisdom...

H-hold on! I’ll have you know my name is not “Booky Wooky!”
You may call me "Grimoire Weiss" I am a great compendium of ancient wisdom.
Treat me with respect!

Artwork of Grimoire Weiss with the protagonists of Drakengard. 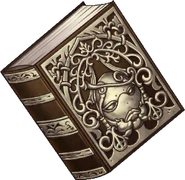 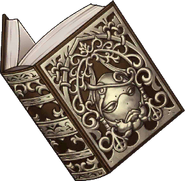 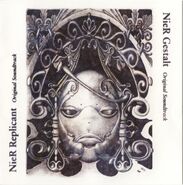