Jack of Hearts, also known as the Knave of Hearts or Jack, is a boss Gestalt in NieR RepliCant and NieR Gestalt (NIER). It is immense, and attacks Nier's village with a multitude of weaker Shades. Kainé and Emil assist in fighting it. It has the power of regeneration, gaining new arms after the limbs have been severed.

It is a large Shade, seemingly made of giant strands of muscle. It pulses black and yellow, and is an immense size, towering over the walls of Nier's home town. It has yellow glowing eyes, a wide mouth with sharp teeth, and strings of "hair" that trails from the top of its head.

After returning from the manor, Nier goes to the library to see Popola. She is feeling unwell and asks Nier to get some vapor moss from the southern gate. Emil, however stumbles through the gate, murmuring, "They're coming...".

Nier returns to the library with Emil. Emil explains that he can hear the Shades, and that they are close. At that moment, the gate outside the library is destroyed. Shades swarm the village, and other gates are attacked. Nier and the villagers manage to hold off the first waves of Shades, and the guards manage to shut the south gate. This, unfortunately, is useless as the immense obstacle proves little trouble for the even more massive Jack, who easily smashes the gate with a single punch and begins its rampage in the town.

Nier and Grimoire Weiss combat the titanic foe in the village and manage to summon a giant arm from Weiss' pages that rips off Jack's left arm. This ends up as another futile effort to stop the Shade, as it is revealed to have a unique ability among its kind, and is able to quickly regenerate its lost limb, to the somewhat worried Nier's dismay.

With its towering size and ability to regrow lost sections of it's body, the Jack appears to be unstoppable as it lumbers towards the library. Despite attempts by Nier and the late arriving Kainé to hold back its siege, it manages to storm up to the doors of the building before seemingly succumbing to one final barrage of Weiss' magic.

Despite its body being destroyed, Jack's head remained alive and continued to attack Nier and company in the library. Seeing it as impossible to defeat, Kainé resolves to hold it behind the door to the basement and be petrified by Emil's stone sight. Once forced into the library's basement, Emil reluctantly does as Kainé asks, and Jack is sealed behind the door as she is turned to stone.

Five years later, after Emil has acquired a new body and powerful magic, he is able to free Kainé from her petrification. However, Jack, still alive after so long, pounces out of the door once again. Nier is able to finally defeat Jack once and for all in one last battle. 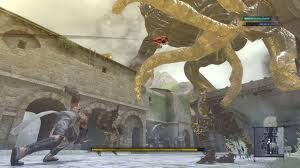 Battling Jack is considered one of the hardest battles in the game because the player fights him several times in one sitting, as well as one final time later on, and then one final time in the second playthrough. During the first stage, the player should focus on using Dark Lance against him, as he is too high to reach for any other attack. Nier will also have to knock away the many Shades that Jack brought with him. A good way to evade Jack's attack where he punches the ground is to double jump, then surprise him with Dark Lance. With his first hand defeated, Nier will unleash a Dark Hand to rip it off, only for Jack to regenerate it.

Phase two of the battle begins with Jack climbing along the rooftops of the village towards the entrance of the Market area. Nier must run to the entrance, go up the stairs, and fight against Jack on top of the wall. Sending magic into his mouth is effective against Jack, but he will occasionally send dark orbs that are chained together towards the player and punch the top of the wall to create earthquakes. Using "Defend" with these two moves will end this part of the battle more quickly.

When taking a considerable amount of damage, Jack will attempt to flee to the center of the village and begin to approach the Library. The player must attack either of his feet for the cutscene of Nier punching Jack's face to appear. Kainé finally arrives to Nier's aid and cuts Jack down temporarily, saying "[t]hat was awesome" before turning around to see that once again, Jack is getting to his feet. This is where the final phase of the battle begins. Dark Lance and Dark Hand are best advised to be used here. Repeatedly attack Jack's feet while jumping to avoid his stomping shockwaves is the best way to go, but the player must act fast, as Jack is now approaching the Library where Yonah and the rest of the villagers are. He will eventually attempt to climb the rocky hillside in front of the library, which means the fastest way to get up there in front of him is by taking the stairs that lead to the library. This battle ends with Nier and Kainé double teaming against Jack, causing for him to become extremely weak. By now, the player is best advised to use Dark Lance as much as possible to defeat him. A cutscene will appear of Nier throwing several Dark Lances towards Jack, piercing him, followed by a "supposed defeat". Also, when the timer appears upon his head, interestingly enough, Dark Blast can deplete Jack's health quicker than any other attack, as it attacks multiple times and quickly.

The next time that Jack is encountered is in the library, though this time, it is merely his head with several tentacles protruding from his neck. The player must destroy these tentacles for him to race into the basement of the library, forcing Kainé to block him from escaping. This is what leads to Kainé telling Emil to petrify her, as she cannot keep the beast at bay for too long without him breaking the door down.

After being petrified in front of the door, five years pass before Emil is able to free Kainé. Jack reawakens and bursts through the door. Luckily for the player, this final battle is much like the last one and shouldn't be too difficult.

The music that plays during the many battles with Jack is called "The Dark Colossus Destroys All".

Knave of Hearts losing its arm.