View source
watch 02:56
Raise a Floppa - The Loop
Do you like this video?
Play Sound
Brother
Father

The protagonist of NieR Gestalt is a middle-aged man in search of a cure for the Black Scrawl, which has afflicted his daughter Yonah. While not officially named, he has since been referred to by fans as Nier.[1]

His traveling companions are Grimoire Weiss, Kainé, and Emil.

Nier is a middle-aged widower left to watch over his only daughter following his wife's untimely demise some years ago. He loves his daughter deeply and strives each day to provide for her as best he can.

Though his appearance seems intimidating, those close to him know Nier as a kind-hearted man with a strong sense of honor and incredible work ethic. Nier is also a skilled fighter trained in the ways of the one-handed sword. Over time, he comes to possess a mastery of the spear and the two-handed sword as well. These skills and many more, come in handy as Nier dedicates himself to finding a cure for his daughter's illness.

The story begins 1,358 years after the events of Drakengard, where a man named Nier and his only daughter, Yonah, has succumbed to a violent cough and must remain in bed while he searches for a cure. Though much time has passed, the world in which this father and daughter resides is, in many ways, one of a simpler time. Villagers live in modest homes and work together to ensure a better life for their community. The entire village knows of young Yonah's illness, and lends their support by hiring Nier for numerous odd jobs and errands. Some would say the work is beneath a man of his caliber but he holds his head high and does whatever he can to provide for his daughter, all the while hoping that the village's wisest members, Popola, and her twin sister Devola, can discover a cure.

One day, Yonah leaves to seek out the Lunar Tear flower her father told her about and may have gone off in search of the Lost Shrine where Popola told her where they grow. Upon searching the Lost Shrine, Nier stumbles upon a talking book capable of wielding magic, calling itself the Grimoire Weiss. The two team up to defeat the army of Shades and two living guardian statues to save Yonah. It is discovered that Yonah is suffering from the Black Scrawl virus, which is linked to the Shades. This partnership with Weiss allows Nier to use magic and the two begin their quest to search the lands to collect all the Sealed Verses that Nier hopes will give Weiss the power to destroy the darkness and save his daughter. In their search, they encounter the hot-tempered, foul-mouthed Kainé, who is herself part-Shade and a young boy Emil, whose eyes petrify anyone that gazes upon them. Their quest sees many hardships, culminating in Kainé becoming petrified in order to seal a deadly Shade beneath the library, while Yonah is carried away by the master Shade, known as the Shadowlord, who carries his own book, Grimoire Noir.

"I have something to defend! I have a reason to live!"
― Nier, when fighting the Shadowlord.

In the five years since Yonah was carried away, Nier has neither given up hope that she's alive nor doubts for one moment that he can find her again. Times have gotten hard for the villagers during these intervening years. The gates to the village remain shut at all times, and food is scarce. News from the outside world seldom makes it to the village because of the increased number of Shades in the neighboring plains - even many of the animals that used to graze in the southern and northern plains have fled the area. The other big difference is that the Shades have become far tougher to defeat, even for Nier. They are outfitted with plate armor and helms and wield swords. The world is in turmoil, and the Shadowlord is behind it all.

Emil believes he has discovered the key to removing his curse as well as unpetrifying Kainé and he and Nier journey to a lab below Emil's mansion, where Emil remembers his past: Emil and his sister Halua were the subjects of experiments into weapons research being conducted under the mansion as part of the "Gestalt Project". His sister, "Number 6", was utilized to create the "ultimate weapon", while he, "Number 7", was kept in reserve. This weapon - his sister - is a large, disfigured skeleton-like creature, and is ultimately defeated by Nier but not before Emil has to seal away her power. This has the unfortunate side-effect of transforming a devastated Emil into a similar skeleton-like body that floats above the ground. However, now he can see and wield his own form of magic. After unpetrifying Kainé, and defeating the Shade, the three set out to find the parts to a keystone that they believe will help them locate the Shadowlord and Grimoire Noir.

With the pieces in place, the team returns to the shrine where Weiss was originally found, in order to defeat the Shadowlord. They encounter the twins Popola and Devola, who reveal to them that all of the remaining humans on the planet, are not in fact humans but Replicants, or "shells", from the Gestalt Project. Faced with its own destruction over 1,300 years ago by a virus, mankind created the Gestalt Project in an attempt to extend human lives by transferring their minds into duplicate shells, free of disease. The project was initially successful, but the Replicants began to exert their own consciousness and gradually became human entities of their own without the original human souls transferred into them. The Shades that Nier and people have been fighting are actually the remains of humans from long ago who have succumbed to the virus, their aggressiveness due to an overwhelming desire to return to a real body. The twins fight against Nier and his friends, but when Devola is killed Popola threatens to destroy everything until Emil sacrifices himself so that Nier and Kainé can continue.

Nier, Kainé and Weiss reach the Shadowlord's chamber and after defeating Grimoire Noir, they discover that the Shadowlord is the original "Nier" as seen in the game's prologue, who was the primary test subject for the Gestalt Project and driven by an identical desire to protect his daughter. Having taken Yonah, he has given the original human Yonah her Replicant body, but this Yonah realizes that she cannot keep it, as she hears the Replicant Yonah calling for her father. She vacates the body, and Nier and the Shadowlord do battle. During the fight, Weiss loses all his strength and disappears, leaving Nier to fight the Shadowlord alone. After defeating him, Nier and Yonah are reunited.

Replicant Nier is about to kill Gestalt Nier, hesitating for a second before dealing a final blow. Afterwards, Nier goes to Yonah's side. Worried when Yonah is not responding to his calls. Soon Grimoire Weiss, after losing his body, uses the last of his strength to speak. He tells Nier that she will awaken when someone says the name of the one she loves the most. The player is then given a choice to write their characters name. If entered correctly, Yonah slowly opens her eyes and observes her father for the first time after five years.

Kainé goes to leave but is stopped by Nier, asking if she wanted to stay with them. She declines, saying she has "her own shit to take care of." The scene shifts over to Nier and Yonah five years earlier back at the village, sitting on the hill near their house. Yonah runs up to a sitting Nier and gives her father a Lunar Tear as they both lay down on the hill.

Ending B starts the same as Ending A. After Replicant Nier defeats Gestalt Nier, the scene then changes to Gestalt Nier scrunched up, weeping to himself— alone in a white void—as he regrets all the hardships he put Yonah through. A flashback occurs, with Yonah and himself alone in the grocery store. He tells her that he isn't hungry, while Yonah tries to force him to eat something.

The scene reverts back and images of enemies that Replicant Nier killed gaze at him while he cries to himself. Gestalt Yonah, in her young form comes to greet him and thanks him for always being there with her, and shares the cookie with her father.

Ending C is a continuation of endings A and B. After Nier defeats and kills the Shadowlord, as Kainé goes to leave she begins to relapse. She then goes into her shade form, forcing Nier to fight her. After Kainé is incapacitated, Tyrann explains to Nier how he can save her. Either by killing her, or forgoing his entire existence for her.

If the player chooses the first option, Nier stabs Kainé as he kisses her, finally ending her pain. Tyrann tells Nier Kainé's last words: "Thank you." A lunar tear falls next to a distraught Nier. He picks it up as he gazes through a window. It's unknown what events occur after this but it's likely that Nier and Yonah returned to the village to live out the rest of their days together before they die from the Black Scrawl, or possibly the events of ending E occur.

If the player chooses to sacrifice his entire existence for Kainé, everything is erased and everyone forgets he ever existed. Nier disappears, while Yonah thanks Kainé for saving her. A lunar tear falls on the ground, which Kainé picks up. When she holds it, she has a flashback of Nier and mentions that it feels like she found something special.

NOTE (It is currently unknown whether ending E applies to Father Nier, as Grimoire Nier specifically refers to Brother Nier, but will still be listed.)

Told in Grimoire Nier, after the Shadowlord disappeared, a program to reset the entire Replicant system begins its execution in the Forest of Myth and Kainé goes to destroy it. The forgotten Nier is reunited with Kainé, 39 again, the approximate age as when they first met, reconstructed with the "memories" that the tree had of his first visit to the Forest of Myth.

"I usually stop before the end, though. The last few entries are pretty bizarre."
― Nier, regarding his wife's diary.

In the DLC, Nier and Grimoire Weiss happen upon a diary that belonged to the former's wife. Weiss asks Nier about it, with him responding that the later pages don't make sense. They then venture into "The White Room" as a younger Nier, and a series of familiar locations and new locations with waves of Shades to fight.

At the end of each location, more of Nier's wife's diary is revealed, explaining the war between Gestalts and their Replicants, and how The Dragon brought magic into the world where it didn't belong. When they finish reading the diary, both wonder what the meaning of the final pages were.

This section is a stub. You can help the NIER Wiki by expanding it. 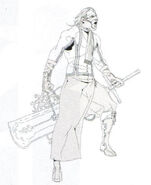 Happy birthday Nier (sketched as an afterthought due to Saito's comment) from D.K. 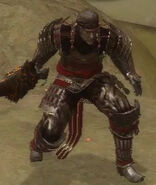 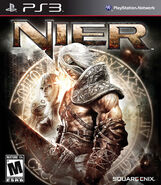 As seen on the cover of NIER.

As seen on the cover of NieR Gestalt.