Eden Riegel
"Stop? Stop? You want me to stop? You think I have the luxury to stop? You cut down my sister like an animal and you tell me to STOP!? No one STOPS!! It's way too late to STOP! No one... STOOOOOPS!!"
― Popola, after Devola's death

Popola, also known as Popol in the Japanese release, is a major character in NieR, its remake and NieR:Automata. She is the younger twin sister of Devola and a friend of Nier.

"Those two have watched the world wither for time immemorial. The cruelness of such a fate is difficult to imagine."
― Weiss, after the twins are revealed as androids.

While her twin sister is a bard who is a regular performer at the tavern in Nier's village, Popola is the librarian in charge of the village library. Both sisters are considered the leaders of the village and are always looking out for Nier's daughter/sister Yonah during his frequent absences. Popola is the one who gives him missions for the main storyline.

It is revealed when the player is in the Shadowlord's Castle that both Devola and Popola are android scientists/observers for Project Gestalt. The twins are revealed to have lived for thousands of years as a result of the initial experiments of the project, and have thus been charged with keeping eye on other experiments as a result: namely over the members of the entire party, including Yonah. They were made to provide support when the day has come for Gestalts to return to the Replicants' vessels. They are tasked with extracting data from Gestalts’ souls, making new Replicants' bodies, and returning a dead Replicant's data to its Gestalt.

Before dying, the twins revealed that the Sealed Verses originated from the experimentation on them both, stating that they only loaned Grimoire Weiss a fraction of their power, meaning that their magic and capabilities are far superior to that of Grimoire Weiss.

Popola is killed by her own attack along with Emil when the latter sacrifices himself to save his friends and counter the magic. It is later revealed that Emil survived that blast, but is only left as a head.

Popola and Devola aid 9S in getting inside the Tower by serving as distractions to the machine enemies. After 9S fails at hacking his way inside, Popola makes an attempt at the cost of being perpetually electrocuted. Devola defends 9S and Popola from the machines until Popola manages to open the Tower's gate.

Devola annihilates the machine she's fighting and drags 9S through the gate Popola opened, saying her goodbyes to 9S as the gate begins sealing itself again. As soon as the gate fully closes it, Popola receives a presumably fatal shock, which brings about a static screen.

A heavily wounded Popola is later seen by with Devola by A2 at the Tower's entrance. They ask A2 if they managed to do some good, with A2 mentioning they had. The pair reveal to her that they have opened the Tower for 9S.

The NieR RepliCant × SINoALICE collaboration has both twins available as a potential character through the collaboration gacha. Their staff can be unlocked through a payment of 300 crystals. When the player uses the job class in battle, only one twin is randomly selected to fight. They do not appear as a team.

Their job story is a third-person narration of the twins' thoughts NieR Replicant that is told in a fairytale like fashion. Neither one of them understands why they were created to be sisters until they forced to bid farewell to one another. To live in such a cruel world, family would have been the only remedy for the loneliness they would have had to endure.

The twins' weapon story is a series of letters addressed to Popola. The first three letters are from the villagers. A child thanks her for teaching them how to make soup for their mother; an ill villager thanks her for the medicinal herb she gave them; a man confesses his desire to date her. Popola comments on each with scholarly curiosity, as she is unable to fully comprehend the sentiments expressed by each author. Regarding the man's romantic confession, she is puzzled by the strange sensation clenching her chest. Popula is most at ease with Devola's note, even chuckling at her sister's concern for her.

"Ancient Song" is the first answer for the collaboration's Twitter quiz.

Popola holding Devola after she dies.

Popola and Devola at the Resistance Camp.

Popola and Devola at the Resistance Camp.

Popola and Devola ready their weapons.

Popola and Devola help 9S get into the tower.

Popola and Devola help 9S get into the tower. 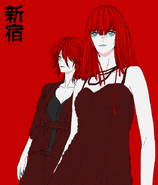