Project Gestalt (German: Gestalt – "essence or shape of an entity's complete form") was initiated in an attempt to save humanity from the incurable White Chlorination Syndrome (WCS for short), which was spread by the maso, after the battle between The Dragon against The Giant.

According to the project's parameters, humans would separate their souls from their bodies, reuniting the two only after WCS was eradicated from the world. The soulless Replicant bodies were created from human genetic data, and their corresponding souls became Gestalts. This process was made possible through the success of the Original Gestalt (later known as Shadowlord to Replicants), the first human to keep their sapience intact during the body and soul separation process. Maso collected from the Original Gestalt was thought to be the only way to prevent the Gestalts' deterioration.

However, according to project files found by the player in NieR Gestalt and NieR RepliCant, an unforeseen error occurred during the separation process for the rest of humanity. It is postulated by Devola and Popola that researchers failed to account for the Original Gestalt's own genetic instability, meaning other Gestalts made following the Original Gestalt's data were also corrupted. Adding to that oversight was the Replicants' unexpected self-awareness, which caused them to reject their Gestalts. This effect is known as a relapse, which causes Gestalts to lose their sapience and become hostile, and causes the Black Scrawl on their Replicants.

Side materials add that these imperfections are artificial errors done by someone originally in charge of planning Project Gestalt. They had wanted a world ruled only by Replicants with their seemingly immortal bodies.

The fusion of Gestalt and Replicant, after the WCS had been purged, was intended to be initiated with the help of Grimoire Weiss and Grimoire Noir to make them true humans again.

It is revealed in NieR:Automata that as a result of Nier killing the Shadowlord, Project Gestalt failed, and humanity became extinct within a thousand years. This event led to the creation of YoRHa, a project whose goal was to destroy all the machines and perpetuate the lie that humanity had managed to escape to the moon and survive there. This was done so the androids would have a motivation to keep fighting and give meaning to their existence, since their creation was done solely to protect humanity.

Because of their failure to stop Nier, Devola and Popola model androids everywhere were blamed entirely for the project's failure. As a result, all future Devola and Popola models were hardwired to harbor constant guilt over their predecessors' failure, and most other androids regarded them with scorn and suspicion. The Devola and Popola that appear in Automata were overseers of an unnamed town during the era of the original NieR, but over the many years since Project Gestalt's failure, were treated as outcasts. They eventually made their way to the Resistance Camp, where they are treated as near pariahs and consistently given the most grueling and arduous chores available while also serving as camp medics.

Players can find many reports of Project Gestalt over the world, located in chests, which roughly describe some events that happened in NieR. Some of these chests require 9S' hacking in order to be opened. 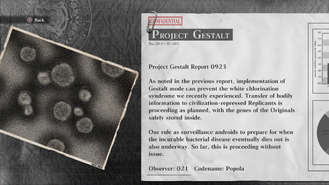 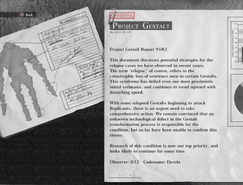 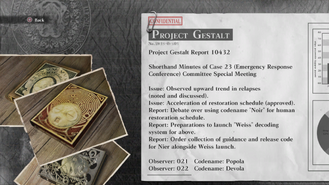 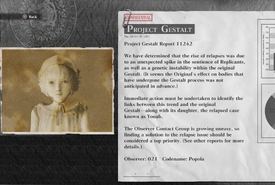