The Aerie is a location in NieR RepliCant and NieR Gestalt. It is where Kainé is first encountered, and where the party later on inadvertently obtain the Sacrifice key fragment—one of five required for entry into the Shadowlord's Castle—by obliterating the entire settlement.

The Aerie overlooks a wide canyon near the Northern Plains. The houses are connected by a series of large platforms, bridges, and ladders. It is frequently shown to be barren, lacking any sight of its citizens, mainly due to their chosen isolation and fear of Shades, outsiders, and generally the unknown as a whole. However, according to Kainé's backstory, it can be assumed that at a time, the village was active to an extent and isolation was moderate considering that some of its inhabitants were outside of their homes.

Interestingly, the houses are repurposed shipping containers, with visible warning labels on their sides.

The Aerie was Kainé's hometown. Because she was intersex, she was ostracized by the superstitious townspeople and their children, who saw her very existence as a bad omen. After her parents passed away, her grandmother took her in, and they moved to an area just outside of The Aerie. During the events of the game (particularly during the first half), the highly-strung townspeople are shown to blame Kainé for almost every misfortune that befalls them, such as when the Shade Hook was fought within the village itself, as they claimed she led it there on purpose.

Nier is instructed by Popola to travel to the Aerie to speak with the village chief. However, upon arriving at the chief's house, he would hear none of what Nier had to say. As he was departing from the village, he and Kainé were attacked by the shade Hook. Five years later, Nier is told that the village has suddenly opened a large shopping center, much to everyone's surprise. When Nier speaks to a citizen and expresses his desire to destroy all Shades, nearly all of the citizens were turned into Shades and a giant one emerged from their defeated remains. After a fierce battle, the entire Aerie was accidentally destroyed by a berserk Emil.

Kainé is fought as a boss the first time she is encountered, and joins the party after killing Hook inside The Aerie.

The Aerie features a mailbox just before entering the main area. It remains usable after the town is destroyed.

Hook is fought first outside Kainé's shack, and later on is chased all over The Aerie, with the party finally defeating the giant Shade for good.

Available during the game's second half are a number of merchants that have set up shop in the town's second circular platform. They can be interacted with as normal, until the guard near the center is spoken to.

Similar to Hook, Wendy must be fought at several spots. Emil lets loose once Wendy's health bar is depleted, and destroys the whole town in the process. 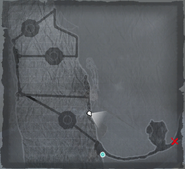 Map
Add a photo to this gallery

Side of a house.

Released screenshot from the ver.1.22... announcement.
Add a photo to this gallery
Retrieved from "https://nier.fandom.com/wiki/The_Aerie?oldid=27396"
Community content is available under CC-BY-SA unless otherwise noted.