watch 02:45
Wiki Targeted (Games)
Do you like this video?
Play Sound

From Grimoire Nier
Summary from Chinese forums and blogs

This article needs work. A proper translation of the novella is required.

THE END IS NIER. THE END OF NIER.

Kainé continues to have nightmares after Nier disappears, with a feeling that she has lost something precious. Kainé remembers saving a girl named Yonah from the Shadow Lord’s castle, and that the shade Tyrann is gone for unknown reasons. Every time she thinks back to that moment, there is always something flashing before her, but dissipating right away.

Troubled by these nightmares, Kainé decides to take her anger out on some Shades by going to the Forest of Myth after hearing about the presence of shades there. As she arrives, she notices that the forest has become something entirely different. It no longer looks like a forest, but instead a fusion of forest and machines, with power cables covering the ground like tree roots, and every step covered in slick green machine oil and sap.

Kainé arrives at the most eye-catching tree in the forest, and suddenly, the cable-like vines form together in the shape of a young man.

Before he can finish, Kainé lops his head off. The body falls apart, and reforms in another area.

“How violent. Allow me to introduce myself. I am (random code), the overseer of this forest.”

“(random code)?...” Kainé paused. The young man continues: “You don’t understand the language my name is in, so call me anything you like, whether it is the “overseer” or “young man”. You probably have a lot of things you don’t understand right now. So what do you want to know? 1) About the forest, 2) about me 3) about the future. Pick one.”

Before Kainé can answer, the young man starts explaining. First, about the Forest of Myth: it is the terminal computer where the ancient people studied the demonic element and quantum physics. The area is entering its final phase, and the shut down sequence has already begun.

As the young man continues his explanation, swarms of P-33 drones rush in and attack Kainé.

On to the second point. The mysterious young man claims to be an existence similar to that of Grimoire Weiss. He controls all the demonic elements, the life and death of all gestalts and replicants, and the information of everything within the area.

A humanoid P-33 robot appears as Kainé dispatches of several P-33 drones. She remembers fighting the robot in the Junk Heap, alongside someone.

“That’s the most important person to you? If you can defeat these kids, I’ll tell you why you are here, and the person that you cannot remember,” the young man laughs as he summons a robot that looks exactly like Kainé.

“The third point – the future. Like I said, this world is a failure. We don’t need robots and humans, and I have lost my reason to exist”

Emil, with an extra pair of arms that accidentally formed when he was doing reconstruction work on his body appears out of nowhere and joins Kainé’s battle against the android Kainé. Emil notices that the tree is the source of power of everything, and the two concentrate their attacks at the enemy’s core.

The scenery, the trees, the ground, and the human face dissolve into a giant puddle.

“Using the power of magic to fuse machines, humans and plants together, this is the truth behind this world! Amazing! Amazing! A replicant like you can reach this level! Amazing!” The young man babbles on as he disappears.

Power cables are whip around in the wind as a storm brews. Emil protects Kainé as she approaches the magical power source. She continues to swing her sword in the overpowering white light. Suddenly, everything quiets down, as though she has arrived at the border between reality and a dream world.

Kainé feels that something important is in front of her. She tries touching it, and can vaguely tell that it is a shape of a person.

She grabs on to it as it slips away, losing something important again.

"This is pissing me off! This is my life! I decide how I’ll live! I don’t need anyone telling me what to do! It’s my decision to die for you as your sword!"

Kainé cries out of fear of losing that important thing again, angry at how powerless she feels.

Someone pushes Kainé from the back, helping her move forward.

“Stop screwing around. How can you just disappear all by yourself! I am the one who will decide what the meaning of my life is! I get to do whatever I want with my own life”

The white light dissipates, and the clear blue sky reappears.

The Forest of Myth disappears, leaving behind a giant techno-organic flower. From afar, it resembles the Lunar Tear. At the stamen, Kainé is holds a person that is important to her.

This person that she is used to see is kind, and in deep slumber.

Kainé looks up to the sky, thinking back to how someone helped push her forward within that white light, when she clearly heard “I’ll leave this guy to you, lingerie woman---”

An Emil with a slightly different body, an older Kainé, and a younger version of “him”..

Yes… His name is… 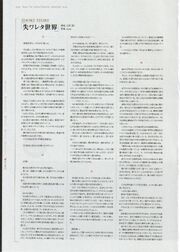 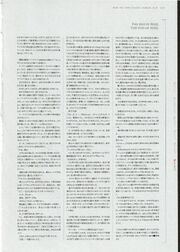 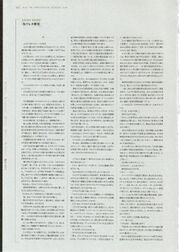 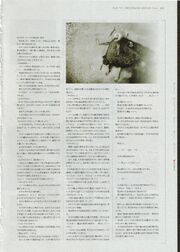 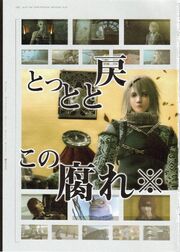 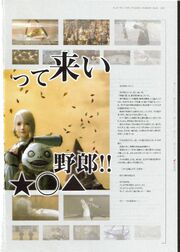 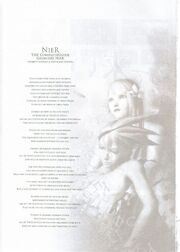 Retrieved from "https://nier.fandom.com/wiki/The_Lost_World?oldid=32965"
Community content is available under CC-BY-SA unless otherwise noted.