"The diary of Nier’s wife opens a gate to a strange world where an unnamed warrior battles powerful Shades. Engage in 15 nightmarish battles to unlock bonus costumes, weapons, and a special quest."

The World of Recycled Vessel, also known as 15 Nightmares, is the first and only downloadable content for NieR RepliCant and NieR Gestalt. Released on May 11, 2010, it was available on both the PlayStation Network and Xbox Live Marketplace for $6.99/6.99€/¥864.

It includes three battle mission packs, two new outfit sets, three new weapons, new types of Shades and new remixed tracks. Players get access to the diary of Nier's deceased mother in NieR RepliCant and wife in NieR Gestalt, who died of the Black Scrawl. As the chapters of the diary progress, it shows how Nier's mother/wife slowly succumbed to the disease, and in turn, became insane.

It is also accessible in NieR Replicant ver.1.22474487139... as extra content, without the need to buy it as DLC. The weapons found in the diary now also count towards earning the Weapons Collector achievement.

To start the DLC in RepliCant and Gestalt, players have to approach the sparkle point in Nier's house, once Grimoire Weiss has joined their party. To start it in NieR Replicant ver.1.22..., players have to approach the same location after viewing Ending A. It will take both into the diary of Nier's late wife/mother, where in NieR RepliCant and ver.1.22..., players will play as the older version of Nier, whereas in NieR Gestalt, they will play as the younger incarnation of Nier.

In this dimension, they enter a white room, that contains nothing but a big white door and the exit back to Nier's house. When opened, the door leads to various old and new places, that are filled with powerful Shades. After all enemies of an area are defeated, he'll be transported to the next level. Upon completing all areas of the door, Nier is brought back to the white room and another white door will appear, which again unlocks a third white door if all levels are beaten.

In total, there are 15 challenge maps—five behind each door. If Nier loses all of his HP during one of the levels, he is thrown out of the diary and his progress of the current door is lost. Should this happen, the game will save automatically, and unlocked doors will remain open.

At the end of the third level of the first door, Nier will acquire the one-handed sword Fool's Embrace, and the Kabuki costume set after the fifth level. In the second door, he receives Fool's Lament, a two-handed sword, and unlocks the Samurai costume set, for beating the third and fifth level respectively.

Upon clearing the final door, Nier will obtain the spear Fool's Accord. Further, the third level also features a vast amount of boxes, which can contain different types of rare crafting materials. Beating the fifth level only yields experience.

Clearing all doors unlocks a special quest where a grieving man demands that Nier ride a boar and run over hordes of sheep in the Northern Plains, as retribution over the death of the man's wife at the hands of the fluffy animals. The man can be revisited at any time provided all doors have been cleared, and he will pay 100 Gold for every sheep slain.

* - Indicates a new or altered area

After unlocking the costumes by completing the first and second doors, they can be toggled in the Options menu in the title screen of the game.

Both costume sets alter the appearance of Nier, Kainé, and Emil during gameplay and non-CGI cutscenes. They'll also replace Yonah during the loading screen with Kainé and Emil respectively. Further, both change the skin of magic orbs, shot by enemies, to Emil's face. 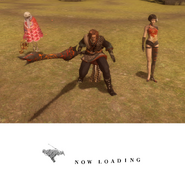 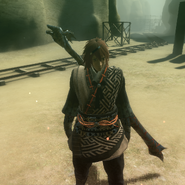 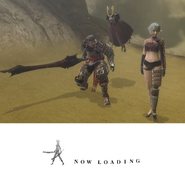 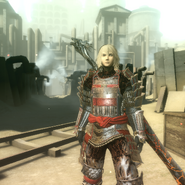 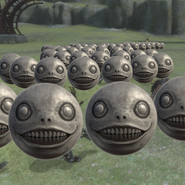