For the location in NieR:Automata, see Pascal's Village.

NieR RepliCant and Gestalt
NieR Replicant ver.1.22474487139...
"Our world is dying. Once thriving populations now lie decimated by plague and disease. ...The end has never felt so close."
― Nier

The Village is a location in NieR RepliCant and NieR Gestalt. It serves as the games' primary hub, and is the home of Nier and Yonah.

Apart from Nier's house and the library, which seems to be the permanent residence of Popola, the village consists of a single strip of buildings by a river. This part of the town is called the Shopping District—however, it is the only district. There is also a large green field surrounding the village as well as a fountain near the library, where Devola sometimes goes to share her music.

The village has three large gates which lead to the outside world. After the attack on the village during the game's first half, the remaining gates are shut, and will then need to be opened when leaving each time. The ferry also becomes available for use after Kainé is freed from the library's door, opening up fast travel at designated spots in the overworld.

Manned by a regular guard NPC in the original release, Nier first learns of the Red-Bag Man and the canal's renovation in NieR Replicant ver.1.22474487139... from Popola instead. Inserted between his visits to the Forest of Myth and the manor in the Southern Plains, she asks Nier to check up on the Red-Bag Man at Seafront, having been absent from work at that point. The Red-Bag Man will then assume control of the ferry early in the game's second half, until his sudden disappearance and death at the hands of Louise. 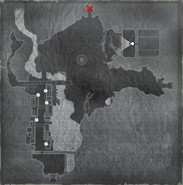 The fountain, featuring Devola and her lute.

Released screenshot from the ver.1.22... announcement.

Ditto, with Jack in view.
Русский
Community content is available under CC-BY-SA unless otherwise noted.
Advertisement