Yonah is a major character in NieR and its remake. Yonah is either Nier's sister or daughter, who was infected with the Black Scrawl. She knows Nier works hard to provide for her and attempts to find a cure for her illness, but there are times when she just wishes he were home to keep her company. Despite being gravely ill, Yonah remains a courageous and exuberant little girl who tries hard to lessen Nier's worrying, although her efforts often cause more trouble than help. Due to her frail health, she mostly stays at home.

During the beginning of NieR, she and Nier were hiding in a supermarket from the attacking relapsed Gestalts. She touched Grimoire Noir when trying to help Nier, but she then turned into a Gestalt, and began to relapse. Because the soul, Gestalt Yonah, was kept in her near-relapsed state, Replicant Yonah who was made from her data will always get the Black Scrawl disease.

Over a thousand years later, Yonah is Nier's only sister/daughter and loves her brother/father deeply, but is young and doesn't always do what she's told. Despite her illness, she struggles against Nier's rules and tries to sneak out of the house whenever she can, often going to the library. When Nier tells her of a Lunar Tear, which can help her illness, she leaves the house to go to a temple and has to be rescued by her brother/father and Grimoire Weiss. For the rest of the time after that she stays at home.

At the end of the game's first half, Yonah is kidnapped and taken away by the Shadowlord. The Shadowlord (Gestalt Nier) realized that Gestalt Yonah's relapse couldn’t be stopped, and planned to give his all to put her soul into Replicant Yonah. After five years , Nier, Kainé and Weiss reach the Shadowlord's chamber and, after defeating Grimoire Noir, they discover that the Shadowlord is the original "Nier" as seen in the game's prologue, who was the primary test subject for the Gestalt Project, and driven by an identical desire to protect his sister/daughter.

Having taken Yonah, he has given the original human Yonah her Replicant body, but this Yonah realizes that she cannot keep it, as she hears the Replicant Yonah calling for her brother/father. She vacates the body, and Nier and the Shadowlord do battle. During the fight, Weiss loses all his strength and disappears, leaving Nier to fight the Shadowlord alone. After defeating him, Nier and Yonah are reunited. However without their souls, the Replicants are doomed to extinction.

Replicant Nier is about to kill Gestalt Nier, hesitating for a second before dealing a final blow. Afterwards, Nier goes to Yonah's side. Worried when Yonah is not responding to his calls. Soon, Grimoire Weiss, after losing his body, uses the last of his strength to speak. He tells Nier that she will awaken when someone says the name of the one she loves the most. The player is then given a choice to write their character's name. If entered correctly, Yonah slowly opens her eyes and observes her brother/father after the five years.

Kainé goes to leave but is stopped by Nier, asking if she wanted to stay with them. She declines, saying she has "her own shit to take care of." The scene shifts over to Nier and Yonah back at the village, sitting on the hill near their house. Yonah runs up to a sitting Nier and gives her brother/father a Lunar Tear as the both lay down on the hill. The scene shifts again, showing a adult Yonah and the Shadowlord about to take each other's hands, then the adult Yonah takes hold and hugs the Shadowlord's arm; hinting that Gestalt Nier and Yonah have reunited.

Ending B starts the same as Ending A. After Replicant Nier defeats Gestalt Nier, the scene then changes to Gestalt Nier scrunched up, weeping to himself—alone in a white void—as he regrets all the hardships he put Yonah through. A flashback occurs, with Yonah and himself alone in the grocery store. He tells her that he isn't hungry, while Yonah tries to force him to eat something.

The scene reverts back and images of enemies that Replicant Nier killed gaze at him while he cries to himself. Gestalt Yonah, in her young form comes to greet him and thanks him for always being there with her, and shares the cookie with her brother/father.

Ending C is a continuation of endings A and B. After Nier defeats and kills the Shadowlord, as Kainé goes to leave she begins to relapse. She then goes into her shade form, forcing Nier to fight her. After Kainé is incapacitated, Tyrann explains to Nier how he can save her—either by killing her, or forgoing his entire existence for her.

If the player chooses the first option, Nier stabs Kainé as he kisses her, finally ending her pain. Tyrann tells Nier Kainé's last words: "Thank you." A lunar tear falls next to a distraught Nier. He picks it up as he gazes through a window. He then goes home and lives with Yonah, with both living out their remaining days before they die from the Black Scrawl.

If the player chooses to sacrifice his entire existence for Kainé, the player's data is erased and everyone forgets he ever existed. Nier disappears, while Yonah thanks Kainé for saving her. A lunar tear falls on the ground, which Kainé picks up. When she holds it, she has a flashback of Nier and mentions that it feels like she found something special.

In an interview with Get News, Yoko Taro stated that Yonah's name drew inspiration from Book of Jonah and the heroine in Mariko Ohara's novel, Hybrid Child (the novel that inspired him to become a game director).[1][2] The English styling of her name was done to avoid "an old man image". In the same interview, Yoko says her diary entries were written by a female employee of the company.

One of producer Saito Yosuke's personal requests was to have a happy ending where Yonah holds Nier's hand. Yoko feels he had granted it yet commented, "But what happens after that is a different story." This is backed up by supplementary material and interviews which reveal that Yonah's illness will never be cured.[3]

It is implied during the NieR RepliCant × SINoALICE collaboration that Yonah eventually turns into a Shade sometime after the events of NieR. Her brother is unable to accept her existence (and his failure to protect her), killing her in a mad rage. Her death causes Nier to swiftly regress into the Shadowlord.

The Shade attacks player characters with magical attacks; she can either attack groups or individuals with a wave of shadowy energy. During her final lifebar, she will start using debuffs by flapping her tiny wings and become more aggressive. Physical attacks are her primary weakness.

"Girl" is the mute Shade resembling her and can be earned as a Nightmare from the event's shooting gacha. When she is summoned in battle, she boosts player characters' magic attack power in the Story or Colosseum.

During the social game's Nier Replicant collaboration revival, players could obtain Beloved Pot, the tome that unlocks Yonah/Sorcerer, through the collaboration gacha with a payment of 150 or 300 crystals. Alternatively, Replicant Medals (Revival) can be exchanged for individual exchange rates (1,500 for the job or weapon only).

Her weapon story is Yonah narrating about a recipe that supposedly heals any injuries and is popularly given to someone's dearest loved one. Plenty of ingredients are added, including a scorpion's claw, leading to its bizarre blue tint. After it's covered and boiled, she looks forward to feeding the finished stew to her brother.

Yonah's job story isn't clear on its exact setting. She is lost, scared, and alone in a place of nothingness. After some time passes, she becomes aware of someone else's lonely presence beside her. They gently pat her head, calming Yonah. Hearing someone's voice calling her, she then feels she "must go." Yonah apologizes to her brother, her last words being that she loves him. 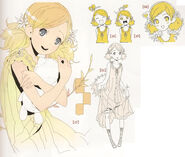 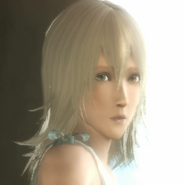 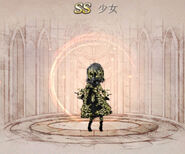 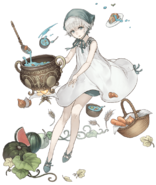